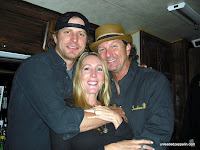 2011 went out like a LION, what with the Pura Vida Tequila infused  ZZ TOP run, KICKER Big Air show, and providing artist hospitality for our friends at ESKIMO JOE'S. That bedlam game and JTNL concert was one for the record books!  Oh....and the whole getting engaged thing to my co-pilot Karri.  Big thanks to Dierks for helping make that evening so special!

2012 is shaping up nicely for the UNLEADED ZEPPELIN tour. The rig was in good hands at the KICKER electronics world headquarters during the offseason. We did roll out for a rare winter appearance at the Jonathan Tyler & The Northern Lights show at Cain's Ballroom in Tulsa.  Cain's was recently listed as one of the top 10 music venues in the country .  It's a bucket list venue for all fans of live music.  Look for us to post-up on this hallowed ground whenever possible!

We will officially kick off the season with Malibu neighbor KID ROCK at the Hard Rock Hotel and Casino in Tulsa this Thursday.  We have several shows at Cain's following in March.  Look for an updated Calendar to launch here in the next few weeks.  BIG news for our West Coast peeps coming in April.  Laissez les bons temps rouler!
Posted by The Keith Oliver No comments: